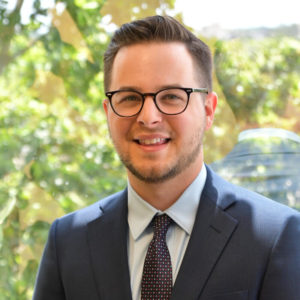 The Florida Institute of Certified Public Accountants (FICPA) announced that Travis Ouimet has been accepted into the 2019-2020 Class of its Emerging Leaders Program.​  ​Travis is among 27 individuals in this year’s class, representing the rising stars within the Florida accounting community.

FICPA’s annual program is designed to strengthen and amplify the leadership skills of FICPA’s Young CPA members, build a peer group network of talented and motivated CPAs, and develop the future influencers of the profession. Program events will be held across the state in Tallahassee, Jacksonville, Tampa, Orlando, Ft. Lauderdale, and Miami. Participants will engage locally with​ ​thought leaders from the accounting profession, local and state elected officials, community not-for-profit champions, and leadership development experts.

The Emerging Leaders Program creates an environment in which young CPAs are able to engage in a dialogue about statewide and national issues impacting the profession, establish strong professional relationships, and be inspired to take the next step forward as leaders. Following the program, all of the participants’ efforts will culminate at the Emerging Leaders Summit, taking place this winter.

Q:  You recently published an article stating that the names of fellow unit owners are a public record.  Is the rule the same for timeshare condominium associations?

A:  No.  When it comes to providing the names (and other information) of owners of a timeshare, the “rules” are different.  Unlike the Condominium Act (Chapter 718, Florida Statutes) or the Cooperative Act (Chapter 719, Florida Statutes), the Florida Vacation Plan and Timesharing Act (Chapter 721, Florida Statutes) provides that notwithstanding any provision of the Condominium Act or the Cooperative Act, an association may not furnish the name, address, or e-mail address of any owner to any other owner unless the owner whose name, address, or e-mail address is requested first approves such disclosure in writing. It is important to note, however, that even though owners are not entitled to the names and addresses of other owners, they can ask the association to mail materials to the other owners if the purpose of the mailing is to advance legitimate association business, such as soliciting a proxy for any purpose (including the recall of one or more board members or the discharge of the manager or management firm).

Q: Each of our condominium units has one assigned carport to park their car. There are only 20 additional parking spaces for 40 units. We have so many people that have two cars, that at certain times of year, there is nowhere for visitors to park. I only have one car and it seems unfair that I can’t have guests. Is there anything I can ask the management company to do about this? J.T. via email

A: Your board would be the proper party to address this issue, though the management company may be involved in the process. Parking limitations are one of the most common problems at condominiums (especially during the “season” and in older condominiums) and also the most difficult to solve.

In a 1981 appeals court case called Juno By the Sea North vs. Manfredonia, the court was confronted with a dispute where the board had to deal with how to allocate 97 parking spaces in a 70 unit condominium. Although the central focus of the litigation was a challenge to the board’s right to assign parking spaces to owners who had not “bought” them from the developer as “limited common elements” (which was upheld) the subject rule appeared to limit each unit to one car with remaining spaces reserved for guest use.

There is no “one size fits all” solution to parking limitations. For example, while a “one car per unit” rule may seem fair to some, would a married couple who both work and have to drive separately think so? Your management company may be able to offer some solutions based on their experience, such as making certain spots “guest only” and implementing some kind of “second car” policy such as a prohibition against second cars with the board having the ability to grant hardship waivers, such as in the example I gave about the working couple. Good luck.

Q: My condominium association has a unit owner who engages in abusive conduct towards the members of the board of directors and other unit owners. Can the association take legal action to force this owner out of the condominium? (N.O., via e-mail)

A: No. There is a 1995 Appeals Court case called Kittel-Glass v. Oceans Four Condominium Association, which held that the Association cannot force a unit owner out of their unit due to document violations. Rather, the remedy would be to obtain an order directing that the owner not engage in conduct which violates the condominium documents.